Prize Bond 200 draw result and schedule 2021. The general public is advised to get fresh updates about National Savings 200 Prize bond. They can also search winning numbers of prize bond 200 below. They can also find the old draw results by selecting draw # numbers of 200 prize bond, which is provided online too and they can note the draw number of the prize bond 200 result.
They can search each update of prize bonds timely and accurately.
Upcoming 200 Draw: 200 Rs Draw List 87 Muzaffarabad September 2021
Latest 200 Draw: 200 Rs Draw List 86 Peshawar June 2021 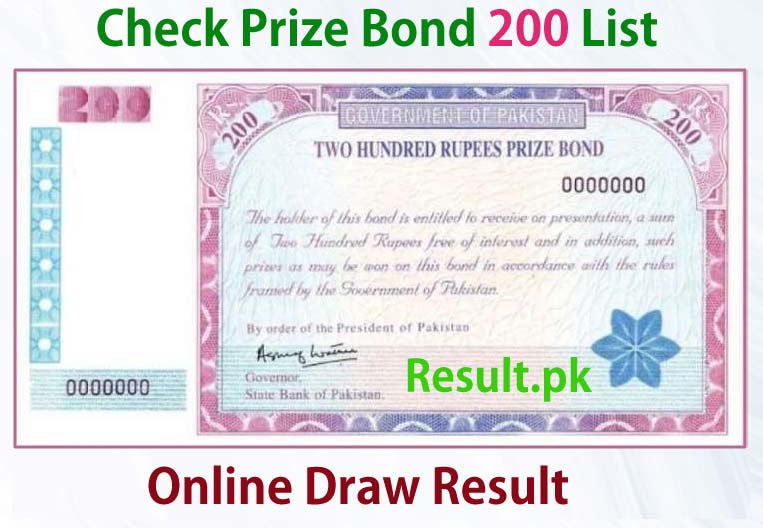 The idea of trading of the prize bond is century old and it was introduced in the subcontinent for the first time and the domination of the prize bond was on Rs.10 and Rs.100. After partition of Indian subcontinent, the concept of national prize bond was emerged under regulations of ‘Central Directorate of National Savings (CDNS)’ and now different bond denomination have been issued in the country, which are comprised of 5, 11, 50, 100, 500, 1000, 5000, 10000 and 25000 Rs.

The lucky draw of the prize bond is done for four times for each denomination and it will increase the chances of winning the prizes of the general public. The printing of the entire prize bonds are carried out by the Pakistan Security Printing Corporation, which is done under the approval of Government of Pakistan. Every bond has the specific security and there are some common features including Rainbow color printing, invisible denomination, Government of Pakistan Reverse and others.