Prize Bond 7500 draw result and schedule 2021. The general public is advised to get fresh updates about National Savings 7500 Prize bond. They can also search winning numbers of prize bond 7500 below. They can also find the old draw results by selecting draw # numbers of 7500 prize bond, which is provided online too and they can note the draw number of the prize bond 7500 result.
They can search each update of prize bonds timely and accurately.
Upcoming 7500 Draw: 7500 Rs Draw List 87 Karachi August 2021
Latest 7500 Draw: 7500 Rs Draw List 86 Rawalpindi May 2021 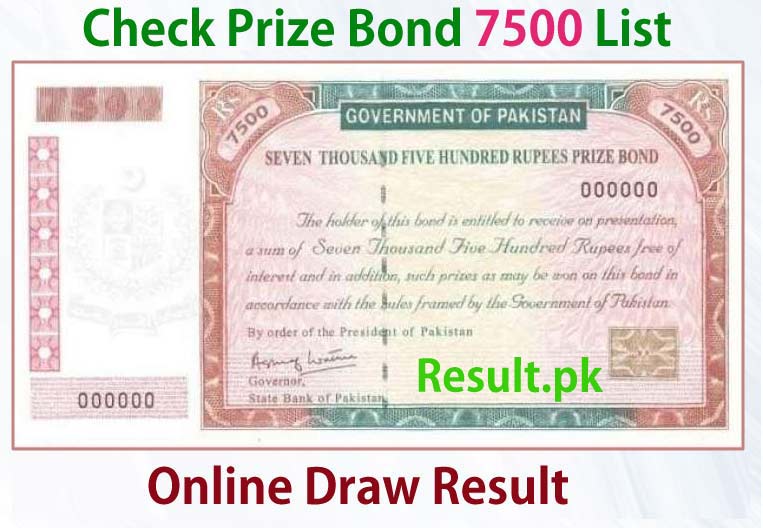 The purchasing of the prize bonds of any denomination including prize bond 7500 are the convenient instruments to carry out the venture. The holder of the prize bond is the proprietor. Ministry of Finance inspires the residents after contributing and getting the enormous prizes. There are two kinds of prize bonds, which are included with basic and premium and 7500 prize bond.

The ordinary bond does not need the great deal of legitimate documentation and the winners can get the prizes in 7500 prize bond draw. The financial specialists need to complete the basic form as the main pre-requisite to buy the prize bond. The mentioned date on the bonds carries the significance when the person holds the prize bond, when he becomes qualified for prize.

The purchasing of prize bond is the main source of the government acquiring and the government has raised the amount of Rs.130 billion through this plan. They also encourage the venture and investment funds attitude among the public. The Ministry of Finance is taking the shot at presenting higher bonds, which offers the tremendous measures of prizes and the eventual fate of prize bond is sprouting and more people are searching for safe speculation decisions. It is best option to contribute simply to understand total elements of working principle of prize bond.

Who Sells Prize Bond 7500 in Pakistan?

State Bank of Pakistan BSC is the important authority to issue the prize bond in Pakistan. The National Savings Center and the key branches of the designated branches are also involved in buying and selling of the prize bonds. The approved banks offer prize bond encashment of maximum Rs,1250. If the sum surpasses, the whole procedure will be carried out at SBP BSC.

Government Organizations which are Involved

It is crucial to realize all organizations, which are related to creation, printing and provision of the prize bonds. Pakistan Security Printing Corporation has the mandate to print the prize bonds and Central Directorate of National Saving or CDNS deals with the government investment funds to serve the people. Public Debt Office issues the protections in order to create the debt from the people.

The people should know that the prize bonds came under Public Debt Act 1944 and they are normally used for contributing and winning powerful prizes, and prize bonds are helpful to be held as insurance against the advances. It depends on your need and pre-requisite and you can use the prize bond for different reasons.

Advantages and Disadvantages of Investing in Prize Bond 7500

When you talk about prize bond result 7500 or 7500 prize bond list 2021, there are goods and the Bads of putting the resources into prize bonds. You win return up to 1800 times of your speculation. The people are instructed to make their own strategy and they can start it with lowest sum, they want. The investment of amount in prize bond in highly liquid and you can redeem them at any point they need after the announcement of 7500 prize bond list 2021. They are generally acknowledged as guarantee against the advance amount. The people can have trust as they will not lose their hard earned money. The prize bonds are same as money in Pakistan as they lose esteem additional time. This makes the people less appealing contrasted with venture choices like gold and its worth does not change to such an extent. The likelihood of each bond winning prize is not so much high.

Add a Comment
Comments will be shown after admin approval.
Spam comments will not be approved at all.
Asad Khan
Why we have every draw of every prize bonds serial in different cities instead of Islamabad to save the time and Tax payers money along with any cheating because so many we lives in USA interested in involve our self but no trust , change your policy and be fair .
Islamabad2020-04-03 02:31:14
Parvez Mustafa
Capital of Pakistan is Islamabad
Dera Ghazi Khan2020-02-21 13:01:42