Prize Bond 750 draw result and schedule 2021. The general public is advised to get fresh updates about National Savings 750 Prize bond. They can also search winning numbers of prize bond 750 below. They can also find the old draw results by selecting draw # numbers of 750 prize bond, which is provided online too and they can note the draw number of the prize bond 750 result.
They can search each update of prize bonds timely and accurately.
Upcoming 750 Draw: 750 Rs Draw List 88 Rawalpindi October 2021
Latest 750 Draw: 750 Rs Draw List 87 Lahore July 2021 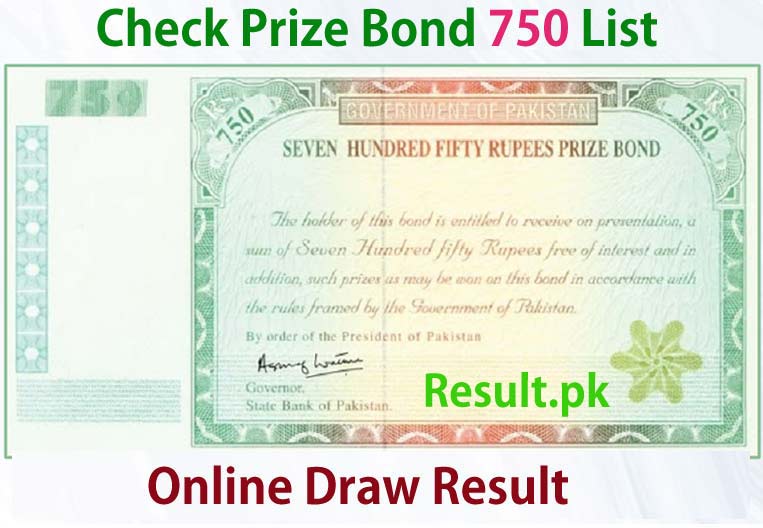 The buying of prize bond gives the secure and safe investment of money or any type of deposit that is provided for the general public. Now the public can purchase or borrow the bond or lottery tickets from the relevant centers on the behalf of the government and the reward depends on the luck. The public can take the chance and they can try their luck, which is not bad because you will win the cash reward and you will become richer and wealthier in very short time.

The concept of prize bond was started in 1960 in Pakistan under orientation of Central Bank of Pakistan, State Bank of Pakistan. They have introduced the prize bond scheme and it is officially known as the National Prize Bonds and this prize bond scheme is introduced in the different denominations including 100, 200 and prize bond 750 and many more. Each bond is varied from each other and the winning amount and winners division also differs from bond to bond. The prize bond 750 and other prize bonds have the winning prizes in three categories that are first, second and third prize.

At this moment, the State Banking National Saving Centers of Central Directorate of National Savings has sole authority to sell the 750 prize bonds and other prize bonds and 750 prize bond draws or other bond draws and 750 prize bond list 2021 and other bond lists, which can give the reward amount to winners according to the prize bond result 750. CDNS has introduced some rules and terms or conditions on prize bond and these rules are added with 750 prize bond draw and every draw is done four days in a year and it can increase the winning cash prize chances for the general public. The lucky drawn of prize bond 750 or 8 other prize bonds are done in various cities including Karachi, Quetta, Islamabad, Lahore and Peshawar, which are few names from various cities. The amount of money is Rs.1250 or up to this amount, the National Saving Sector has the authority to issue winning amount to winner and in case of cash reward, it is over Rs.1250 then the amount of prize, which is claimed from any branch of State Bank of Pakistan. The public should keep in mind that the prizes will be claimed from any SBP branch within 6 years from the drawing date.